Website is currently undergoing maintenance.
The website may not behave or appear correctly in some cases.
Apologies for any inconvenience this may cause.
visit vch.ca
MENU
You are here: Home > Hear’s to the Team!

Hear’s to the Team!

The body is a noisy place. Hearts beat, blood swooshes, eyes blink. Even patient movement can interfere with sensitive audiometry testing devices used to determine if a person can hear.

This was the challenge faced by VGH audiologists recently as they tried to determine the extent to which 29-year-old Dana Mitchell’s hearing had been affected by years of chronic ear infections and the complications of treatment.

As a patient with autism spectrum disorder and the developmental disabilities, Dana’s ability to understand the need for testing was limited. Her fear of hospitals made the task of testing that much more difficult as well. 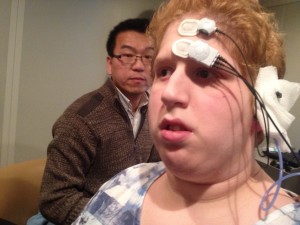 Dana Mitchell, 29, successfully underwent a full hearing test with VGH Audiology Practice Lead, Dr. Qi Li, on March 5. She was the first patient to take advantage of the new technology that is now available at the hospital, thanks to funding from the VCH Innovation Fund.

After several meetings with Dana’s family, her health care providers, her referring physician and researchers at the UBC Audiology program, the VGH audiology team concluded the best way to test Dana’s hearing would be via the use of a new piece of technology from Vivosonic, the Integrity 500.

The Integrity 500 uses advanced in-situ amplification and wireless technology to take readings directly from the auditory system, significantly reducing interference from the body’s own artifacts or other ambient noises.

Because of the unique needs of many patients, such as Dana, the VGH audiology team applied to the VCH Innovation Fund to purchase the technology required.

It is the first system of its kind to be installed at a hospital in Western Canada. The Integrity 500 was installed at March’s start and Dana was the first patient to use it on March 5.

The new test confirmed that Dana had some hearing in her right ear. This means that Dana, with the help of some clinical interventions, will again be able to hear music; the single greatest joy in her life.

“To have Dana live in a silent world without music would be inhumane,” said Shelley Mitchell, Dana’s mom. “That Dr. Li and his team found a way to test Dana to determine if she could hear is as important as if they’d given her a new heart.”

For VGH audiologists, having access to this testing technology means they can now obtain accurate readings from patients who are very young, very old or suffer from cognitive disabilities, like Dana.

It’s also resulted in speedier testing times, allowing the units four audiologists to reclaim as much as an hour of time each per day.

Thanks to everyone’s critical inputs and suggestions, the solution found to address the testing challenges posed by Dana will benefit other audiology patients at VGH well into the future.

View all articles related to a VCH strategic priority:

Not sure if you’ve got the right stuff for VCH News? Check out the Submission Guidelines or ask us.